The name of this game makes it quite obvious what it's about: Scania Truck Driving Simulator is a simulator for driving, parking, and maneuvering Scania R-series trucks. It's closely related to the more famous truck simulation game from the same developer, the Euro Truck Simulator series, but it differs in some important aspects.

For beginners, Scania Truck Driving Simulator doesn't come with the same huge sandbox world for free roaming like the Euro Truck Simulator games, as it focuses more on short yet challenging courses that include hazardous roads and tough competition stages. There's still a free roaming sandbox mode as well, but smaller than the one that actually made Euro Truck Simulator so famous. There are also fewer customization options, but that's somehow understandable considering that this game focuses on one single truck model, the Scania R-series. As for the rest, the graphics engine, the physics, and other important aspects are shared between these two games.

Anyway, don't get the wrong idea that Scania Truck Driving Simulator is just a less appealing, inferior version of an Euro Truck Simulator game. For example, the various courses titled Dangerous Drive are really challenging and addictive. There are also online leaderboards and a unique multimedia gallery covering the real-world annual Scania driving test completions. If you prefer focusing on the technical part of a truck driving simulator, on the actual driving and maneuvering, and not on the fleet managing or world exploring parts that count more in the ETS games, then Scania Truck Driving Simulator will surely please you. 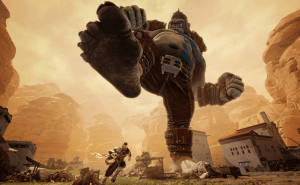 Extinction, the David vs Goliaths simulator is almost here

Start the engine and drive your trucks across the realistic roads of UK.

Trucks & Trailers gives you an authentic experience of truck driving.

It is a game in which you can test your parking skills with huge trucks.

This simulator acts out the transport of dangerous goods near Chernobyl.

Thank you for rating the program!
Please add a comment explaining the reasoning behind your vote.
0 comments

Master of the Skies: The Red Ace
Top